One the main reasons I write these articles is to encourage and empower my clients. This weekend I was reminded of one of the easiest and fastest ways to help yourself in any situation – EFT! While there is always a time and place for BodyTalk and other more complicated modalities, the Emotional Freedom Technique is the easiest way to Keep It Simple. EFT uses short phrasing and tapping on various acupuncture meridian points to clear mental, emotional and physical pain.

I love to ski. I own three different sets of gear from x-country to downhill to back-country/alpine touring. As soon as June comes around, I’m missing skiing so much I’ve already planned several trips for the following winter. So it’s not an option for my kids not to love skiing.

My daughters received their first set of skis at age 2. Mackenzie took after her dad and is a solid skier. Kayla was my little dare-devil and would fly off huge jumps in the terrain park without a thought. Well she did, that is, until she turned eight. At that time a past life event kicked in, and overnight she became mortally afraid of heights. Not just on the ski hill, but riding a bike down a hill, or looking over a steep cliff while hiking. 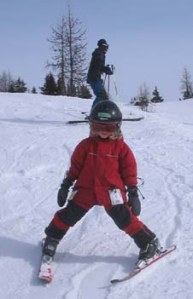 The past life event was eventually cleared, but the damage was done. There was now a learned fear of heights holding her back. Until this past weekend.

My family and I were skiing some black diamond (most difficult) runs at the Lake Louise ski resort. As we got to the lip of a steep mogul run, Kayla immediately went into panic mode, shrunk herself down into a ball, and froze; completely unable to ski. Getting down was slow and painful, and no amount of encouragement helped.

On the lift ride back up, I was wracking my brain what to do while on the hill, when I remembered EFT.

First, I took the edge off the whole event (that steep black diamond run) with two initial rounds of EFT. She went from a fear intensity of 10, to a 3 and then to a zero.

Next, I focused on the specifics. She felt really scared when she looked over the lip of the run and saw how steep it was. One round of EFT and that was gone.

I asked her to scan her body and find anything else that scared her. At one time during lessons, her skis pointed straight down the run and she took off like a rocket. That really scared her, and she was afraid it would happen again. The first round of EFT took her from a 10 to a 7. The second round dropped to a 3. To finish it off quickly, as we were nearing the top of the lift line, we did a visualization to pull it out of her body. Viola – intensity down to zero.

The best part of doing EFT right on the hill was the ability to test it. We got off the lift and went straight back to the same run. As Kayla looked over the lip of the steep run, she said she felt fine and wanted to get going. I noticed her posture and overall energy was strong. I took 5-6 turns before I stopped, and Kayla was right behind me. No problem.

Kayla skied the rest of the day with speed and confidence, which meant she had a huge amount of fun.

After reading this I just know you want to jump in and learn EFT for yourself. There is only one person you can learn EFT from, and that’s the founder Gary Craig. You’ll find his amazing website here – www.emofree.com. There are excellent articles and videos to take you through the process step-by-step. There is a LOT of information here, so if it’s just for yourself, then learn the “Basic Recipe” and leave it there.

If you’ve tried EFT before, but didn’t learn it from the official EFT site or Gary Craig, I encourage you to learn it again from Gary. I promise it’s well worth it.

As always, I value your feedback. Leave a comment with any success stories you’ve had with EFT.