Fairview Mountain is well named as there are indeed fair views to be had from all directions. Fairview is a very accessible summit in Banff National Park, located directly above the icy blue waters of Lake Louise. From this vantage point, you can see all the mountains around Lake Louise, plus a fairly close view of Mount Temple.

I went with the Alpine Club of Calgary – Calgary section. As it was late August, and mid-week, most tourists had gone home, and the locals were thinking of heading back to school. As a result, we were able to get parking at the Lake Louise lot. There is now a shuttle bus service to Lake Louise, accessed from the Mount Temple Overflow parking lot. Make sure you check the website and follow the parking / shuttle directions before you go as it is a moving target.

As this is a hike, and not a scramble, I brought my regular pack kit, hiking boots and poles.

From the Lake Louise parking lot, go towards the lake. Head towards the boat house on the left side of the lake. Look for the trail signs that say Fairview Lookout and Saddleback Trail. Take this trail.

Continue on the wide and well-used trail, following the Saddleback Trail signs. You are in the forest for the first couple of KM. The trail then breaks out into more open slopes with an abundance of larch trees, scree piles and large boulders. Keep an ear and an eye out for the various marmots and pikas that live in these rocks. Please keep dogs on leashes so they don’t harass the local wildlife. 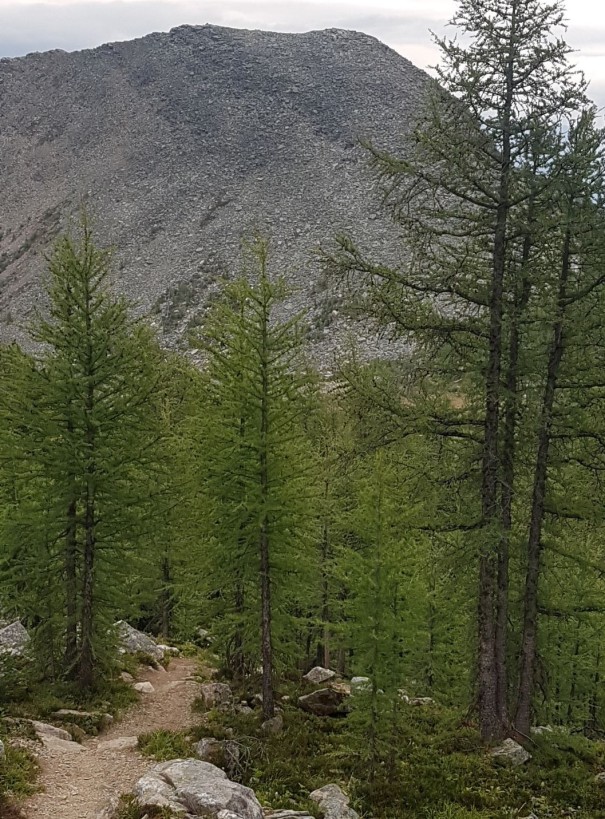 You get a look at Fairview Mountain as you ascend the hiking trail. The route up is further along.

More open slopes with an abundance of wildflowers. 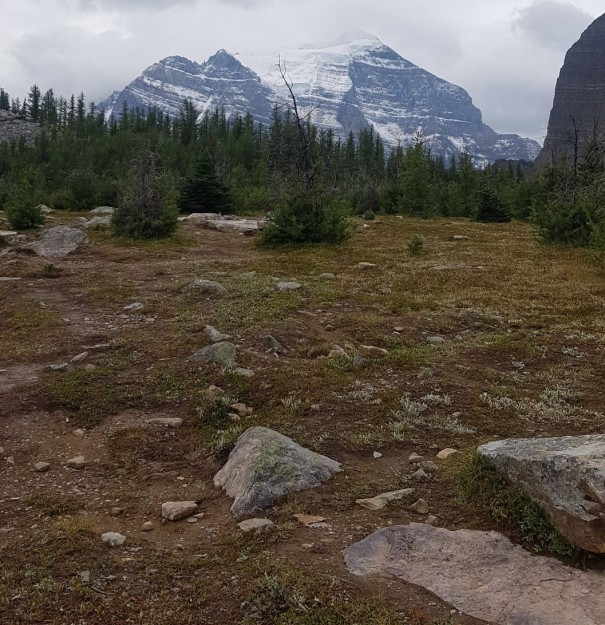 This is the coolest view of Mount Temple looming up as you ascend the trail. Temple looks so close, but there is a major valley in between.

At one point, the trail points directly towards Saddleback Mountain. I bet you can tell why it’s called that 🙂

Looking down at the Saddleback / Fairview Col from Fairview Mountain. The trail back to Lake Louise is the super obvious line heading down to the left.

Funny story at the col… As I was waiting for my group at the col, the Calgary Seniors Club showed up. We got to chatting as I knew a few people who skied with them in the winter. One member then whips out a card and asks me to join. “Oh no,” I said with feathers slightly ruffled, “I’m not even close to being a senior citizen!”  “That’s okay,” he replied “we take people 55 years and up.” Okay – now my feathers were fully ruffled, as I was still in my 40s, thank you very much!!!

From here, take a good look at Mount Temple. This is not the view of the “tourist’ route, but instead the glacier capped north face. 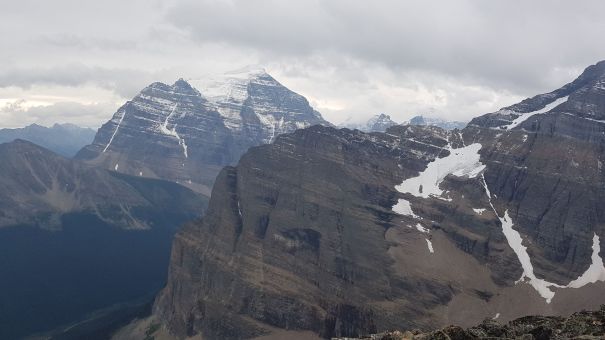 The majestic north face of Mount Temple with its glaciated peak.

Head right and make your way up this well trodden trail through scree and large lichen covered boulders.

Despite the elevation profile showing this section going straight up, I found the trail to be very well graded with just the right amount of switchbacks. It is definitely harder than the hiking trail below, but doable.

The trail to the summit of Fairview Mountain is about 1.4 km, but it doesn’t feel too bad because of the amazing views. As you hike up, the view of Mount Aberdeen (and the two peaks in front of it – Sheol Mountain and Haddo Peak) rises up to your left. This view was so majestic that I felt emotionally overwhelmed. I had to stop hiking, and just take it all in. This is why I hike. To allow the strength of the mountains to pour into my soul. It builds me up, and makes it possible to go back to the town where I live.

The higher you get, the boulders on Fairview Mountain get bigger. In the background, Mount Aberdeen slowly rises up. This is one impressive mountain, and being able to see it side-on from Fairview just increases its wow factor. I would love to be ‘that’ mountaineer who could climb such a beauty.

At the summit, there are several places to stop and eat your lunch. We did a bit of summit lounging up here, waiting for the other members of our group to come up. This gave plenty of time to take photos, and chat with the various tourists we met up there. I’m always impressed when people go out of their way to come to Canada.

The summit ridge is fairly long. Feel free to walk to the end. There are lots of places to stop and eat your lunch if it is crowded. We were the first ones up, and had it to ourselves for a good while. 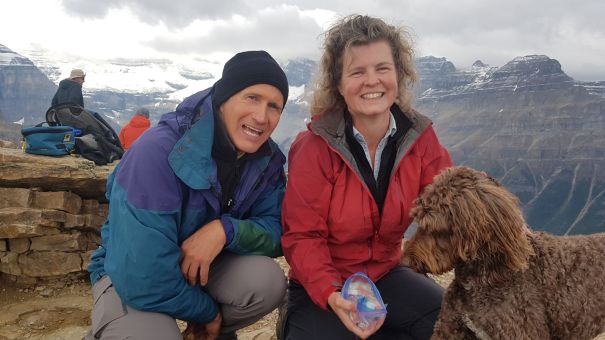 Me and fellow ACCer on the summit. I was trying to get a photo of his dog looking into the camera, but he only had eyes for my lunch.

Here is a panoramic views from the summit of Fairview Mountain.

Return the way you came. There is no circuit, at least not for hikers.

Do not be tempted to take a shortcut back to Lake Louise, despite being able to see it from the summit. This is an old sign, but obviously needed as I’m sure more than one person has been tempted.

On the return trail, you get different views, like Whitehorn and Lipalian Mountains, which are both home to the Lake Louise Ski Resort and Summer Gondola. 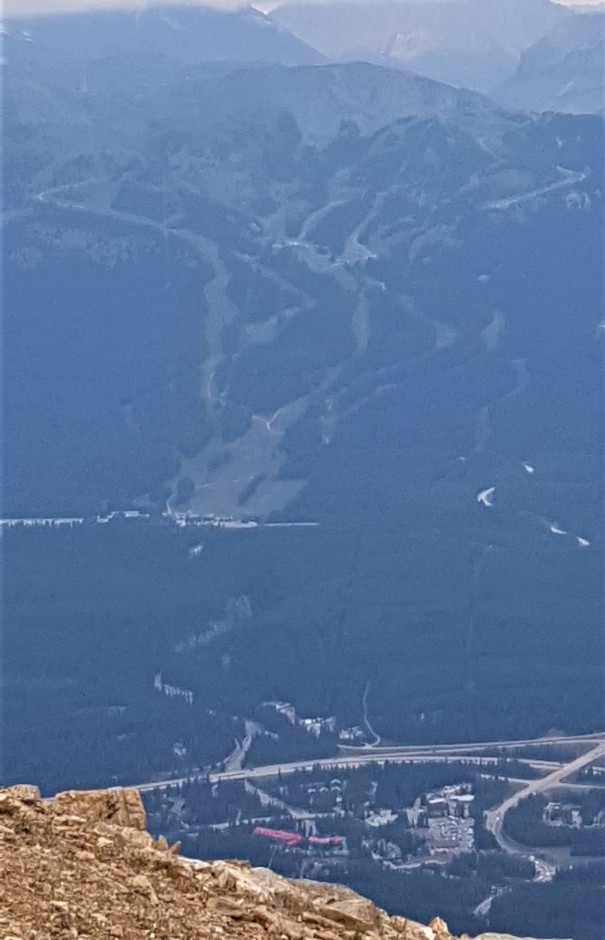 Looking across the valley to the Lake Louise Ski Resort. You can see the ski runs on Whitehorn Mountain.

You also get a top view of the Chateau Lake Louise.

The Chateau Lake Louise at the end of Lake Louise. Despite the looming weather all around us, we stayed dry.

We had lots of waiting time as the group was split into two. If you really take your time, with lots of summit lounging and chatting at the col, then plan for a full 5.5 hours. Which, since it’s such a long drive, you may as well enjoy your time on the mountain! 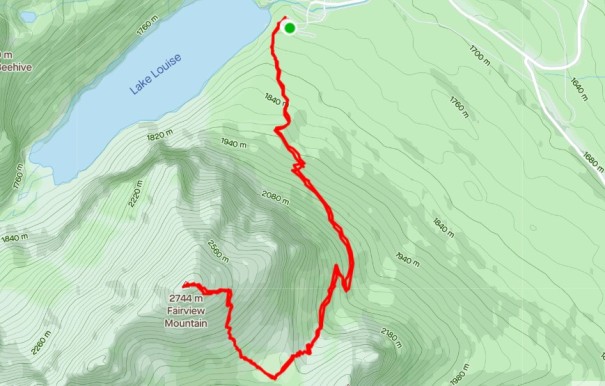 The trail to Fairview Mountain starts at Lake Louise, and then curves around the base of Fairview until you reach the col between Saddleback and Fairview Mountains. From here, it’s a final push up to the summit.

It is a fairly easy trail to the col. From the col, it’s more or less straight up to the summit of Fairview Mountain.