Intuition is all the little coincidences we notice in our everyday life. I absolutely love to think of them as magic, because they add so much wonder to our lives.

Isn’t it is so amazing when you think about someone you haven’t seen in years, only to bump into them at an event later that day? Or when you read some random thing on Facebook, only to need that exact bit of knowledge to fix your kid’s bike?

Thoughts and ideas popping up in our heads before we need it is another example of our subconscious working for us, for our benefit. Your subconscious is connected to all things and people – all consciousness – so it’s not surprising when it already knows when your old colleague is going to be at that event, even if your conscious brain doesn’t.

The key to accessing this magic is to cultivate these coincidences. Revel in them, share them with others, to allow the magic to happen more and more often.

But what about the dark side of coincidences? When you feel something bad or negative is going to happen. A lot of people are scared of these ‘premonitions’ and therefore try to avoid all intuition.

We are taught that our thoughts become our reality. So if you think bad things, then that’s exactly what will happen, right?

Our mind has a real need to box things in, to create polar opposites to compare and contrast. So, there is no light without dark, no hot without cold, no good without evil. Would you enjoy summer as much as you do without winter to compare it to? No life without death, so enjoy the life while you can because it will end.

Unlike popular belief, intuition doesn’t just warn us about upcoming blessings in our life. It’s just that in our safe and prosperous First World, that’s normally what we receive.

If you go on the assumption that life is not 100% perfect, and sometimes things do go wrong, what’s your response to that?

What not to do.

Getting ready for a canoe trip to remote Murtle Lake.

About 13 years ago, when I was newly pregnant, I had my very first stroke of intuition.

I went on a back-country canoe trip with my husband to Murtle Lake in BC. The road to the lake is an active gravel logging road; very twisty with many blind corners, steep drop offs and zero guard rails to keep us from falling off the road and down the steep mountainside.

As my tires left the smooth pavement and started bumping along the gravel, I felt this sense of dread rise up within me. It struck me that we were going to be hit by another vehicle.

As this feeling was new to me, and I didn’t want to look foolish in front of my husband, I did what any rational person would. I completely ignored it. 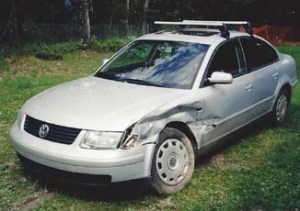 My car after it was hit by the truck on the logging road.

On the very last blind corner before the lake, a pick-up truck came barreling along. I watched the driver’s eyes and he just didn’t seem to register that we were there. I slowed down, and pulled over to the edge as far as I could go. He hit my front quarter, then pushed me ever further towards the edge before he finally stopped. When my husband opened his passenger door, all he could see was open air.

As the car was towed away, the wheel marks in the gravel showed we were less than 6 inches from going over the edge.

Afterwards, my husband and I talked about the accident. As it turned out, he too felt something bad was going to happen. (He’s a Pisces so yes, we actually talked and he has amazing intuition.) We also discovered there were several things we could have done differently.

First, I needed to voice my concern so we could start the conversation we were having now, after the accident.

Second, with the intuition acknowledged, we could come up with some solutions. For example, I could have honked my horn going around the blind corners to alert the other drivers we were there before they could see us, or slowed down to a crawl when approaching a blind corner to give both vehicles maximum time to react.

Third, I needed to implement the solutions.

All of those things would have allowed me to react appropriately to the upcoming danger. Would I have avoided the crash altogether? I don’t know. It might have turned into a near miss instead, who knows? The point is, if you don’t VOICE your concerns, it’s impossible to come up with positive solutions on how best to deal with the impending darkness, whatever it may be.

What you are NOT responsible for.

During the 2002 Winter Olympics, I watched in anticipation as Jeremy Wotherspoon – one of the greatest male speed skating athletes of all time – assumed his position at the start line. He was sure to win to Gold. As I awaited the start, my mind idly wondered what would happen if he fell at the start line? Hmmm? Did that even ever happen? Naaahh.

Jeremy Wotherspoon falling at the start line of the 2002 Olympics.
Photo: BBC Sports

The gun went off and BAMB! Jeremy sprawled face first on the ice.

If you thought I was horrified, I can only imagine how Jeremy felt.

OK – this was just straight intuition. Somehow my subconscious knew Jeremy was going to fall. Does this mean I caused it? Heck no. No more than you control the outcome of the Flames winning their playoff game if you don’t change your lucky underwear. Let it go.

What prompted this was a young tween-aged client named “Jane” who noticed she can tell when bad things are going to happen. It was scaring her, understandable so.

For example, Jane and her friend were walking through town when they saw a group of older teenagers. Jane’s intuition kicked-in, and she immediately felt danger. Jane told her friend she wasn’t comfortable going past the teens, so both girls decided to turn around and leave. As they did,  the group of teens started yelling at them. It was a really scary moment for both girls.

However, Jane did exactly what she was supposed to do. She paid attention to her intuition, she voiced her concerns to her friend, and they came up with the solution to leave. Had Jane kept quiet, and had they walked right beside the teens, the consequences might have been a lot worse than being yelled at from afar.

I explained to Jane that her intuition was her very own magic, that she was using it perfectly already to keep herself safe. She didn’t cause the teens to be there, but she was alerted to the danger, and thus avoided it.

Jane has been feeling much more powerful since this session, and talks to siblings about her ‘magic’. She no longer dreads the knowledge she has, but sees it as a way of keeping herself safe. I see it as a way to encourage us (especially girls) to listen to and validate that powerful intuition we are given.

Since my car crash on the mountain, when I feel any type of future dread or misgiving, I voice it immediately to someone who can understand the situation (for example, I don’t confide in my children as that would only freak them out. “Uh oh, Mommy thinks there’s an axe murderer in the house.”).

Funnily enough, not a single “bad” thing that I’ve felt has ever come to fruition since I started this policy. I might be totally wrong on my premonitions, or I may have had numerous near misses. Who knows, and really, who cares. What’s important is, I feel more powerful being able to talk about it, finding ways to avoid the danger, and then letting it go.

I hope you’ll join me in enjoying the magic of your intuition, and using these steps to proactively deal with anything less than desirable that may be coming your way.